Kolo Toure has revealed how a slide tackle on manager Arsene Wenger during an Arsenal trial changed his career. The infamous story, was previously told by Ray Parlour and Wenger, and was confirmed by Toure in an interview.  The Ivory Coast JMG academician joined Arsenal in 2002 from ASEC Mimosas and – as a 20-year-old – was keen to impress in a trial game with players as Thierry Henry and Patrick Vieira on the field.

“I spent two weeks there and, as you know, I tackled  Arsene Wenger, But, you know, I think that slide tackle changed my career. It showed the manager just how much I wanted to be successful, and how much I wanted to become a professional footballer. That’s how he took it. All the players were laughing and I was in shock. I thought they were going to get rid of me there and then but Arsene is an intelligent guy. He only saw a young African boy who was keen to impress him, and gave me that opportunity to express myself and show what I was capable of doing.

Last year, Parlour had revealed how the Arsenal stars had reacted when first playing alongside the young defender. 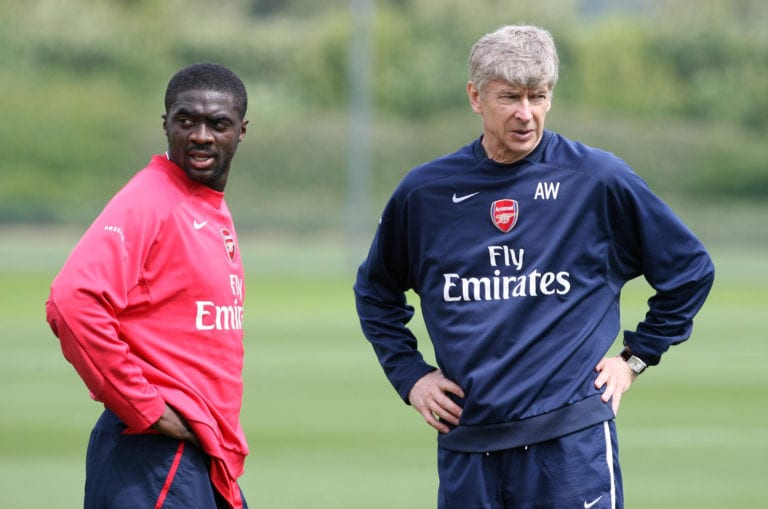 “I passed the ball to Thierry Henry and right then Kolo Toure from nowhere smashed him from behind. Two-footed tackle. Terrible tackle,” Parlour recalled to Talksport.   Seriously, it could have been a red card in a normal game. Our best player is rolling on the floor. Arsene Wenger says ‘Kolo, what are you doing? Don’t tackle, don’t tackle.’ I just wants you to stand there. ‘Oh, sorry, sorry’ goes Kolo.

“Then Kolo takes Bergkamp out! We’re like ‘Woah, don’t kick him!”

“Thierry goes on to Kolo, next minute: BANG! We’re going ‘No Kolo!’”

?“Then the ball lands at Wenger’s feet. BOSH! Kolo takes him out!”@RealRomfordPele on Kolo Toure’s #Arsenal trial is brilliant ? pic.twitter.com/bXqHl5ltR4

Next minute ball goes into Dennis Bergkamp, they’ve swapped now. Kolo Toure does exactly the same and two-foots Dennis Bergkamp and we are thinking ‘this is unbelievable’. The move worked out well as Toure repaid his £150,000 price tag by being the centre-back partner to legendary defender Sol Campbell as Arsenal completed the Invincible season in 2003/04. As well as winning that Premier League title, Toure also won two FA Cups during his time in north London.